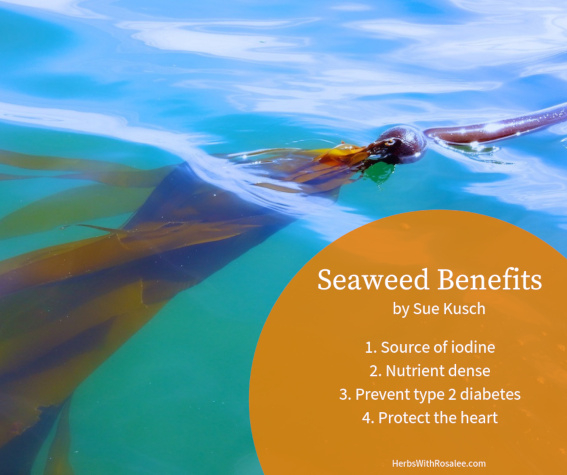 One of the first herbal books I purchased was Rosemary Gladstar’s Family Herbal: A Guide to Living Life with Energy, Health and Vitality and, in the second chapter, I was introduced to seaweed benefits as “mineral supplements.” Though I grew up on the Great Lakes, my mother didn’t like seafood of any kind so I didn’t eat anything that lived in water until I was 17 years old. Over the years, I have come to love salmon, trout, halibut, and crab.

But seaweed? I was reluctant. But given the many nutritional benefits, I felt obligated to at least try. The salty taste is one of my favorites but the fishy smell and taste are not! As well-known botanist and sea vegetable expert, Ryan Drum Ph.D., notes: “All seaweeds are edible. Many are unpalatable. Some are very tasty after drying, roasting, or lightly steamed. Most are not very tasty fresh, wet and alive.”1

Brown seaweeds like kelp and bladderwrack offer the best natural food source of iodine and tyrosine, which can help prevent hypothyroid disease (deficiency). (Note: people who are iodine-sensitive should use caution in the amount and the type of sea vegetables they consume.) Some seaweeds offer bioactive compounds that may prevent or help manage Type II diabetes mellitus.2  Bladderwrack contains a carotenoid called fucoxanthin that may help with insulin resistance and assist with weight loss.3

Seaweed food contains an abundance of vitamins and minerals including iron, calcium, B vitamins, beta carotene, and the much-desired omega-3 fats. Seaweeds also contain antioxidants including carotenoids, flavonoids and vitamins A, C, and E that can help protect against cell damage. They are high in fiber, which can assist with feeding gut bacteria. Studies in 2015 indicate that seaweed may offer preventative help with cardiovascular diseases.4

Nori: Likely the most popular seaweed, it is used fresh as a wrap for sushi and, more recently, available as dried sheets for snacking. It’s important to find a supplier who offers nori that has not been harvested from polluted areas.

Dulse: A protein-dense and salty seaweed that can be eaten as a snack or used as a salt substitute when powdered. In 2015, Oregon State University declared the ultimate taste test results: when fried, fresh dulse tastes like bacon!

Kombu: A variety of edible species fall under the generic name of kombu. Kombu can be eaten dried or fresh, is often pickled and is a primary ingredient in the Japanese soup broth, dashi. It can be cooked with beans and helps to improve their digestibility and reduce flatulence.

While there are other sea vegetables that have been historically used for consumption, it’s important to read the latest research and testing being done on sea vegetables. Hijiki is one example: though eaten for centuries, it now tests for high levels of arsenic. 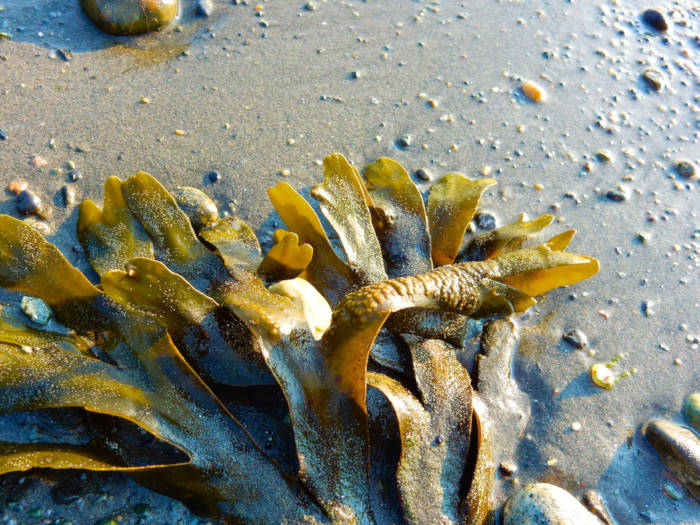 Where seaweed is harvested and the environmental quality of its habitats are important considerations. Our coasts (seaweed is primarily harvested from coastlines) can be subject to industrial pollution, oil spills, and mining and agricultural chemicals. Seaweeds can quickly accumulate heavy metals; in fact, there has been some experimentation with using seaweeds in bioremediation of coastal waters. If harvesting seaweed for personal use, it’s critical to research the environmental quality of the area you are harvesting from. When purchasing edible seaweed seek a reputable company that does testing of its sea vegetable harvests and posts the results on its website.

How Does Radiation from Fukushima Impact Seaweed Benefits?

In 2011, the Fukushima nuclear plant in Japan leaked radiation after experiencing a 9.0 earthquake and tsunami. There was great concern about the impact of radiation on the Pacific Ocean and the west coast of the United States, with many dramatic media reports reporting unsubstantiated claims of seafood species that were loaded with radiation. The United States FDA has monitored imported food products from Japan since the accident and has issued multiple updates revealing that radiation levels that were detected were not a threat to public safety.

In 2015, 52 scientists created the Kelp Watch 2015 project and focused specifically on testing and analyzing the kelp forest system in the Pacific ocean for possible radiation contamination from the Fukushima nuclear accident. They tested 48 samples and concluded the following:

“Kelp Watch 2015 has officially ended with the analyses of samples collected during the spring and summer of 2016. There was no indication that the radioactivity from Fukushima became incorporated in the coastal kelp beds sampled. Legacy Cs-137 (half life – 30 y; from weapons testing in the 50s and 60s) was detected in all samples, however, no Cs-134 (half life 2 y) was detected in any samples. The presence of Cs-134 in kelp would have indicated the presence of Fukushima derived radiation. Surprisingly, low levels of Iodine-131 (half life 8 days) was present in all kelp samples taken from the ports of Los Angeles and Long Beach indicating a persistent local source.”5 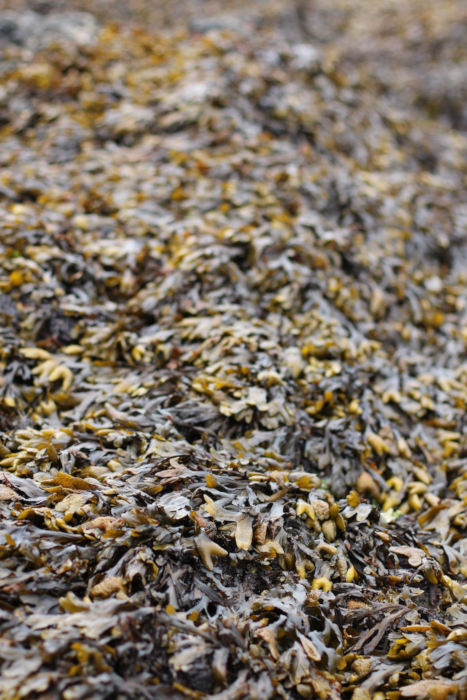 Over the years, because of their nutritional benefits, I tried various seaweed preparations but none of them won the taste, smell and texture tests I impose on foods. I know all you sushi-eaters are shaking your heads and exclaiming that I don’t know what I am missing. But that’s how it rolls sometimes. We all have our taste and texture issues, right?  A few years back, I discovered powdered dulse and kelp at Mountain Rose Herbs and realized that I could still get the nutritional benefits of seaweed by incorporating it into seasoning blends as a powdered salt substitute. My studies in Traditional Chinese Medicine introduced me to the concept of using powdered herbs as both food and medicine so it was easy to think about using seaweed powders as a salt substitute. If like me you suffer from texture and taste rules, then consider a powdered version of seaweed and use it for seasoning.

I love to make my own seasoning blends and while exploring some new culinary spice & herb blends I discovered dukkah seasoning. When I have it made, I use it every day: on veggies, fish, meat, bread, pizza, pasta, and popcorn. It is so delicious! I seldom follow a specific recipe and have seen countless versions of dukkah. Your choice of nuts and sesame seeds are mandatory; their oils help to keep everything blended. Because of the nut and seed oils, make small batches and store in the refrigerator.

This recipe is from Mountain Rose Herbs Blog but I have substituted salty dulse powder for the sea salt. Kelp powder is another option.

In a pan, lightly dry toast the hazelnuts and sesame seeds in separate batches until they turn golden. Remove from heat.
Mix all of the spices together (except the peppermint, dulse and pepper) and toast in a pan over medium high heat for several minutes or until they become fragrant. Be careful not to burn the seeds during this step. You’ll want to toss them around and babysit them a bit. Allow all ingredients to cool.

Pulse the spice mix in a food processor to finely grind. Add the hazelnuts, sesame seeds, peppermint, dulse, and pepper, and then pulse until it becomes a coarse meal – but not a butter. Serve with olive oil and bread, swirl into dough before baking, or add to veggie dishes. 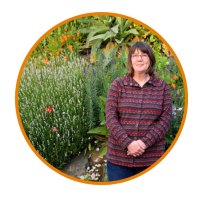 Sue Kusch, a former community college instructor and academic advisor, incorporates her experiential wisdom, expertise and science-based research garnered from her three decades of growing vegetables, fruit and herbs into her educational writing about plants and how people use them. In addition to her BA in Social Sciences and Masters in Education, she completed the Master Gardener training in 2011 and two permaculture courses in 2001 and 2014.  She has studied medicinal and nutritional uses of herbs, including studies at Herbmentor and East West School of Planetary Herbology, since 1997. An avid reader, lover of historical and folkloric information, and a promising storyteller, Sue writes about the intersection of plants and people.

Return from Seaweed Benefits to the Main Herbs Page

Return from Seaweed Benefits to HerbalRemediesAdvice.org