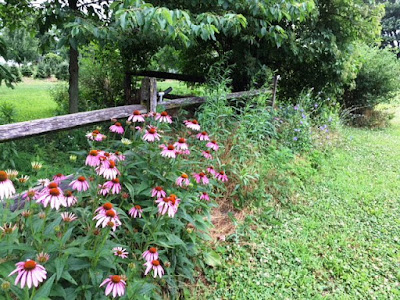 One of the most popular medicinal plants in
North America for stimulating the immune system is Echinacea.  Its history can be traced to 1753, when a
Swedish botanist, Linnaeus gave the plant its scientific name Rudbeckia
purpurea. The name Echinacea came from the German botanist, Conrad Moench in
1794.  He named the genus Echinacea,
which is derived from the Greek word echinos (denoting sea urchin or hedgehog),
referring to the plant’s sea urchin like cone-shaped seed head.

Echinacea is native to North America and is
a genus of the aster family.  The plant
grows in mid-western North America from southern Saskatchewan, westward to
Texas, eastward to Georgia, northward to southern Canada and the areas in
between.  Its most common name coneflower
comes from the unique large cone shaped beam in the center portion of the
flower head (the disk).  It is known by
different names in various parts of the United States, including snakeroot,
black Sampson, red sunflower and Indian head.
In North America there are nine species of the drought and frost
tolerant perennial with stunning, daisy like flower heads.  The colors of the flower heads vary from deep
purplish-pink to white. 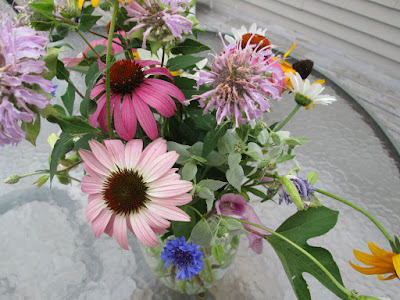 Only three of the species have a history of
use and clinical testing, including E. angustifolia, E. pallida and E.
purpurea.  The species differ in
appearance. The angustifolia is narrow-leaved with short ray petals that do not
droop.  The pallida is taller and
sturdier than angustifolia with pale purple flowers that droop and curve
towards the stem.  Echinacea purpurea is
the tallest.   The flower heads are large and colorful.  The flowers are rose to deep purple.  Purpurea’s lowermost leaves are coarsely
toothed with irregular teeth, distinguishing this species form the other common
Echinaceas. There are two species that are listed as federally endangered in
the United States.  They include E. tennesseensis
from Tennessee and E. laevigata from the Appalachians.  The other four species include E. paradoxa
that is yellow-flowered, E.simulata similar to the pallida, E. sanguinea and E.
atrorubens. 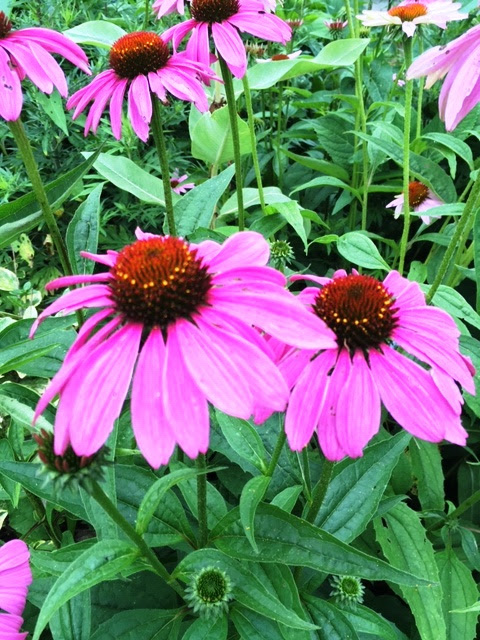 Echinacea was traditionally used as a blood
purifier for fever and skin conditions.
Since the 1990s, Echinacea has been one of the most popular herbal
remedies, primarily used as a short-term stimulant for the immune system to
help fight colds and flus.  The roots and
aerial parts are used medicinally.  Echinacea
preparations are useful for a wide variety of other conditions:  These include general infection, poorly
healing wounds, urinary tract infections, enlarged lymph glands, sore throat,
bites, stings, allergies, skin regeneration, psoriasis, and other inflammatory
conditions.  Echinacea helps increase
non-specific activity of the immune system, enabling immune cells to
effectively attack viruses, bacteria, and abnormal cells as opposed to specific
immunity such as antibiotics which are directly lethal to bacteria. 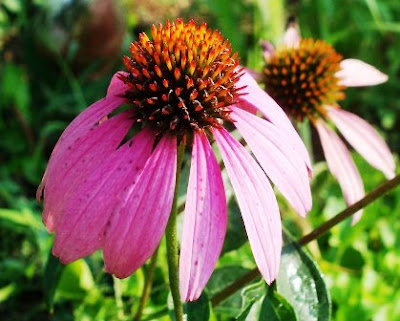 At the first sign of cold or flu, take
Echinacea every 1 to 2 hours. The acute dose consists of 10 to 20 drops of
Echinacea as a tincture, or 3 to 4 capsules every 2 hours, or 1-2 tablets every
couple of hours.  Slowly reduce dosage
frequency as symptoms subside, lowering to 3 times per day after condition has
cleared.  It has been my personal
experience that maximum stimulation occurs with frequent initial doses, when I
feel a cold or flu coming on.  For
prevention purposes, take 3 times daily for one or two weeks, than stop for a
rest.  In cases of chronic immune
imbalances take up to 3 or 4 times daily one week on and one week off.  Use for longer than 10 consecutive days is
not recommended even though some herbalists suggest using Echinacea on an
ongoing basis.  German researches have
found that activation of phagocytosis (a process in which phagocytes destroy
circulating bacteria, viruses or foreign bodies) lasts only 10 days and
afterwards the immune system becomes accustomed to the dosage and no longer
responds. 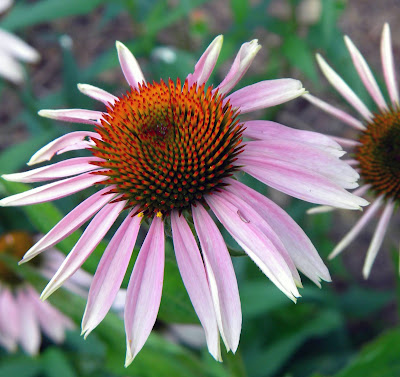 E. purpurea or/and angustifolia are the
preferred species used medicinally.
There are many kinds of commercial products available such as: Liquid
extract or tincture of the root, capsules from the dried, powdered root of the
herb, teas from the leaves or flowers and preparations made from the fresh juice
of E. purpurea aerial parts, the best studied Echinacea preparation.  This form of Echinacea is approved by the
German Commission E, a group of experts that evaluates herbal medicines in
Germany and serves as a guideline in Europe for regulation and supervision of
herbal supplements. 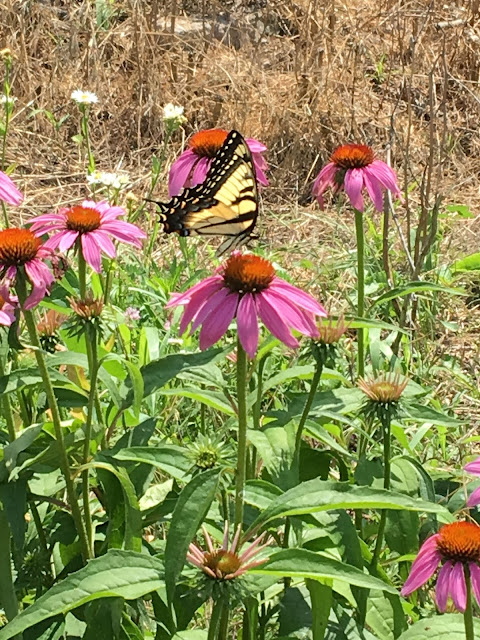 Unfortunately, adulteration in the
Echinacea trade has existed since 1909.  The
roots of Parthenium integrifolium has been used in some commercial products. Its
root when cut and sifted looks like E. angustifolia root, but not E. purpurea.
It is important to purchase products from reputable companies that identify or
grow their own Echinacea, preferably “certified organically grown.”  Purchase preparations as fresh as possible since
the roots lose their effectiveness once exposed to air, warmth or moisture for
more than a few months.  Capsules in
glass bottles last longer than if they are packed in plastic.  Liquid preparation or tinctures retain their
potency the longest.  The alcohol in
tinctures is irritating to some people but can be diluted by boiling. 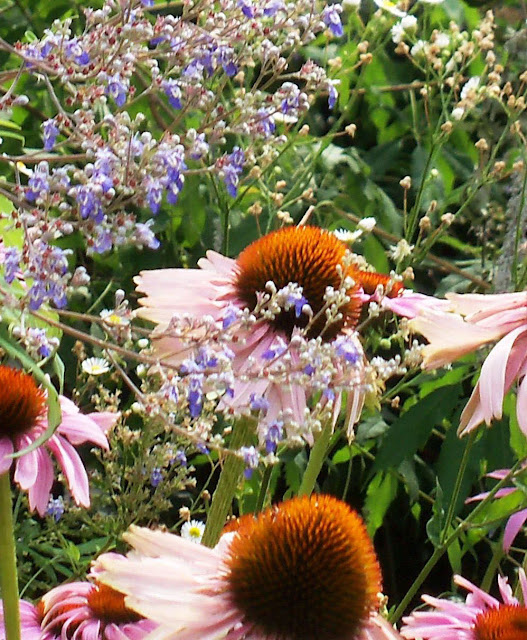 Echinacea is a safe herbal medicine with no
overdosed, contraindication, drug interactions of note, and few adverse effects
having been reported.  This is in sharp
contrast to over the counter medications. The only unfavorable reports with
Echinacea have been skin rashes, unpleasant taste in the mouth, and rare cases
of nausea and vomiting.  Echinacea should
not be used by people who have tuberculosis, multiple sclerosis, or autoimmune
disorders (diabetes mellitus, rheumatoid arthritis), according to the
Commission E.  The concern arises of the
possibility of the antibodies formed by the immune system attacking the body’s
own tissue.
Joe
Smulevitz is a Chartered Herbalist, a Master Herbalist, and author of
numerous health articles.  He can be reached at herbalistjoe@sympatico.ca.