Since there just isn’t enough confusion about elderberry on line right now (that’s a joke, btw), I thought I’d throw this article into the mix 🙂

Writing this
particular article proved to be one of my more interesting writing
experiences.  I had completed and
submitted it, only to have a series of events unfold in the following couple of
days which required Tina and I to discuss a re-write. 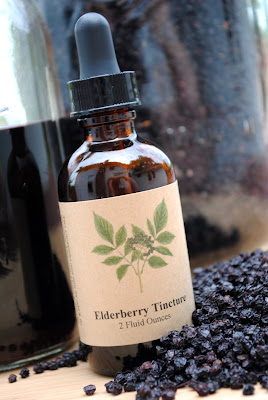 In a serendipitous turn of events, only hours
after reviewing my article, Tina was approached by an elderberry farmer who
mentioned new research being conducted on elderberry toxicity.  As a result, I was able to run down and
interview Andy Thomas, a research professor with the University of Missouri
Southwest Center. He shared with me details of an elderberry toxicity research
project, due to be published in the coming months. I will begin with the
currently accepted information on elderberry toxicity, and then follow up with
what I learned from Thomas.

Conventional
wisdom regarding elderberries has been they are toxic when raw, and that the
cyanide producing compound in them is neutralized with heat.  Elderberry
branches, stems, leaves, and seeds contain potential cyanide in the form
of cyanogenic glycosides. When ingested, these glycosides react with an
enzyme, beta-glucosidase, and hydrolyze, releasing hydrogen cyanide.
Elderberries aren’t the only food containing cyanogenic glycosides: Lima beans,
flax seed, almonds, apple seeds, cherry and plum pits, apricot and peach pits,
cassava (the source of tapioca), spinach, peas, soy, and bamboo shoots.  However, I don’t see anyone loosing sleep
over eating spinach and lima beans … ummm, well, maybe if you don’t like
those vegetables. 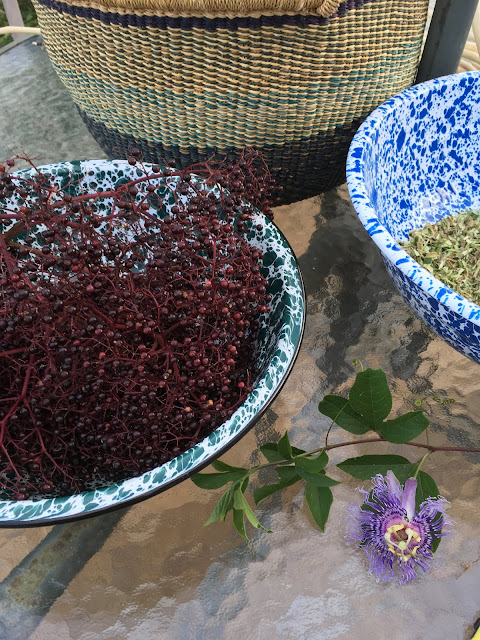 Exposure to small
amounts of cyanide can cause dizziness, headache, nausea, vomiting, rapid
breathing, and rapid heart rate. Exposure to larger amounts can cause
convulsions, loss of consciousness, low blood pressure, and respiratory failure.
How much ingested cyanide is toxic to human beings? Well I couldn’t find an
exact number, but one source cited 98 mg in one day (and stated the lowest
documented lethal dose as 37.8 mg), and the John Hopkins Center for Health
Security cites 100-200 mg when ingested as sodium or potassium cyanide.
Another source cited “0.5-3.5 mg/kg bw. Approximately 50-60 mg of free
cyanide constitutes a lethal dose for an adult man.”  The human body is able to clear small amounts
of cyanide through the liver involving a molecule called thiosulfate, and if
enough tiosulfate is not present, then cyanide poisoning occurs.  Taking
this into account, it stands to reason that poisoning will vary from person to
person, depending on body weight, fasting/non-fasting, and individual metabolic
factors.

Having a general
idea of how much cyanide is lethal, the next question is how much cyanide can
you find in elderberry? I could only find a couple of sources, which both
stated 3mg per 100 g of fresh berries, and up to 17mg per 100 g of fresh
leaves.  However, when I followed up with
both articles’ source material, Assessment Report on Sambucus nigra L., fructus
by the European Medicines Agency, I could find no such numbers.  What the report did state was that
information regarding the level of cyanogenic glycosides in the fruits and seed
was not available.  Of the two sources I
found, one came to the conclusion that it’s inconclusive just what the
concentration of cyanogenic glycosides found in the berries and flowers.  If you were to go by the amount of 3 mg, then
it would take eating approximately 3 pounds of raw elderberries to get a toxic
dose of cyanide.

Here is where the
new Missouri University elderberry study becomes
relevant.  The University, working in
conjunction with several state agencies and farmers, have been exploring
elderberry as a commercial crop. A range of different studies have been
conducted and written about, the most recent focusing on the toxicity issue.

The study focused
on American Elderberry (Sambucus Canadensis), which is a different species than
the European Elderberry (Sambucus nigra).
Thomas referenced another study which established that cyanogenic
glycosides in American Elderberry are lower than those found in the European
Elderberry. The toxicity study only encompassed the edible berries, and did not
include the leaves, stems, and branches. Tested were ripe berries,
red/under-ripe berries, green berries, and pedicels (tiny stems that attach
berries to the umbel). Thomas stated that they even had a student who
painstakingly separated skin, seeds, pulp, and juice of berries, so the
individual parts could be tested for glycosides.  Using the levels of cyanogenic glycosides
found in commercial apple juice as a benchmark, the study found that all parts
of the raw elderberry – green, red or ripe – contained lower levels of
glycosides than commercial apple juice.  The study also examined the levels of
beta-glucosidase found in elderberries.
Cyanogenic glycosides in elderberries represent a potential for cyanide,
but only convert to cyanide if reacted with beta-glucosidase. The study found
there were insufficient quantities of beta-glucosidase to convert the
glucosides to cyanide.

The study
concluded that the raw berries of the American Elderberry were as safe, if not
safer, than commercial apple juice because 1) cyanogenic glycoside levels were
extremely low, and 2) insufficient quantities of beta-glucosidase were present
to convert any glycosides to cyanide. 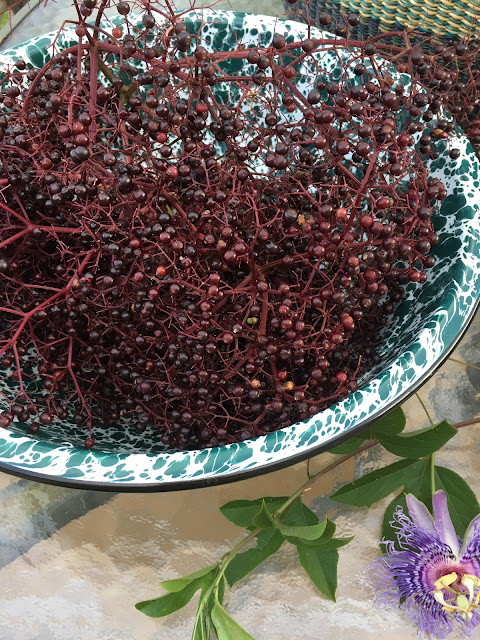 The good news is
that it doesn’t matter if we know the exact levels of glycosides in elderberry.  What matters is that we know that cyanide
evaporates at a temperature of a little over 78°F (26°C).

I found a pretty
comprehensive study of the effects of heating on cyanogenic glycosides, which
was informative, and reassuring.  In the
study, bitter apricot seed was boiled in water for 15 minutes, resulting in a
98% reduction in glycosides.  Bamboo
shoots were down 91% after 15 minutes of boiling, and no detectable traces were
found after 60 minutes of boiling.
Cassava boiled for 20 minutes was down by 97%, and only trace glycosides
were found after 35 minutes.  Flax seed
was dry heated for 15 minutes, resulting in only a 10% reduction in
glycosides.  The study referenced
previous studies of dry heating which resulted in only 16-18% reductions, and
concluded that dry-heating did not reduce cyanide content effectively.

I’d like to add
one little side note, not related to toxicity, but relevant to heating
elderberries.  There are a few studies
which have examined the effects of heating elderberry.  One such study found “short-time heat treatment reduces
potential allergy-related risks deriving from elderberry consumption without
seriously affecting its properties as an antioxidant and free-radical scavenging
food.”  Another study indicates gentle
heating may render the polyphenols in elderberry more bioavailable, but this
particular aspect is still controversial, and needs additional study.

Taking all of
this information into consideration, my personal conclusion is that
elderberries are as safe to consume as apples, with or without heating. Care
should be taken to remove leaves, stems and branches, and a short 15 minute
gentle simmer shouldn’t adversely affect the beneficial properties of the
berries. While not the tastiest raw berries I’ve sampled, when checking my
bushes this afternoon, I didn’t hesitate to pop a handful of elderberries into
my mouth.

Editor’s Note:  For the first 10 years of herbalizin’ I didn’t heat the berries before tincturing.  Then, after having zero problems in all that time, as far as stomach problems, the internet terrorized me into cooking them first.  Now I will say that heat releases their juice more easily – so that is one benefit.

What is Sage Good For?

What is Sage Good For?